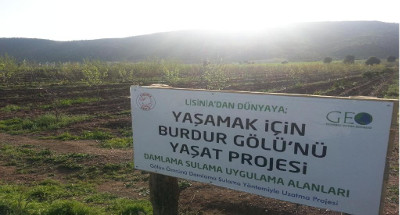 (Burdur Gölü agonizes because its water decreases; Unless precautions are not taken, people will come across carcinogenic chemicals)

While Burdur Lake, which is a tectonic lake, was a water mass with 200 m depth in ancient ages, today it is a water mass with 8 m depth. The water decreasingly came to our day with more vaporization and less rain as a reasult of climatic changes and heating of terra. Today the lake became unable to be nourishedbecause climatic changes, modern agricultural practices, so-called drinking water, and gave this lake 20-30 years tol ive. We need to think Burdur Lake as a basin. Even the far field’s using water effects the lake seriously.

As Lisinia Nature, we have been performing works in order to provide the right leading of using water globally by creating a model in activities within the center, surrounding villages and region-wide, and introducing this model in region and our country later world with the project “From Lisinia to World; Keep Burdur Lake Alive to Live!” which was began 5 years ago in order to draw attention on gravitation of Burdur Lake and to save the lake by terminating gravitation.

Within the project performing since 2007;